On the heels of the Kentucky Derby many people wonder how winner California Chrome travelled to and from his home racetrack of Los Alamitos in Cypress, California, to Churchill Downs in Louisville, Kentucky. 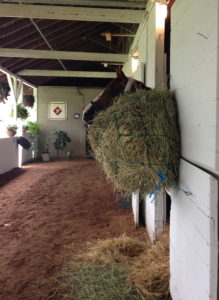 California Chrome wasn’t shipped by train and he wasn’t driven in a trailer. He was flown by air in a Boeing 727 Cargo plane. It sounds unbelievable but there are numerous reasons why the best horses in the world are flown from race-to-race instead carried in a horse van.

Horses are foragers and their bodies function best when they have freedom to move around. A trip from Southern California to Churchill Downs, takes about 35 hours for a direct drive, and with layovers it could take up to three days! Your Derby winner would have arrived exhausted, stressed, underweight and possibly ill.

Reducing travel time reduces stress so a horse can stay at the peak of his performance ability and even train the next morning. From stall-to-stall, California Chrome was on the road for about six hours before arriving in Kentucky.

The best show horses and racehorses in the world can accumulate more frequent flier miles than George Clooney in Up In The Air! No security lines, free access to hay, and experienced handlers delivering first-class care make air travel a tempting transportation method. The only part that is unappealing is the price tag. Most flights cost from $3,500 – $10,000 per horse. This explains why only the upper class equines are making trips through the sky, while the bourgeoisie are still riding in a traditional horse van.

When California Chrome arrived at the airport, he was lead off of a large, semi-sized horse van, and up a gangplank walkway (with secure siding), and into the plane. His hooves never touched the runway. He and his equine travel mates were contained in slots lined up and facing the front of the plane. Racehorses usually ship calmly because each slot is similar to another small space they are accustomed to, the starting gate. In case of a rare emergency, the knowledgeable employees of the equine airline are qualified to administer tranquilizer.

No pilot announcements and no windows make the landing a surprise for human companions. No temperature regulation can result in what I have heard people call “the flying icebox”. There are several rows of seats located in the back of the plane behind the horses for the grooms, riders and trainers.

California Chrome had an even shorter flight when he shipped to Maryland for the Preakness and his shot at the Triple Crown. Best of luck as you fly to the wire California Chrome!